The Vines resort shot to prominence by hosting the Heineken and Johnnie Walker Classic, when players like Greg Norman and Ernie Els had fans flocking to the fairways. Now, it’s 36 holes of quality golf, a renovated 4-star resort and access to Western Australia’s oldest wine region luring golfers to The Vines.

In the iconic Swan Valley wine region sits a golf resort capturing the partnership between two renowned designers, who have crafted twin championship layouts out of the picturesque Darling Ranges. Though Ross Watson and Graham Marsh’s creation is most known for the composite course on which three different PGA Tour of Australasia, European and LPGA Tour events were held, both the Ellenbrook and Lakes courses offer quality Western Australian golf. The Lakes Course: 6,494 metres
What makes the golf at The Vines stand out is that the courses were built before the resort, country club and residential development was thought about. It ensured that of the 1,000 acres Marsh and Watson had access to, golf received the cream of the real estate’s crop. The Lakes is definitely the stronger layout and being the members’ course it just snuck into the Australian Golf Digest Top 100 Courses at No.93. But Ellenbrook still contributes nine holes to the tournament setup.

Like any good resort course, The Lakes isn’t brutal from the opening tee shot and allows the golfer to warm into the round. A couple of forgiving, mid-length par 4s open the round before a reachable par 5 builds confidence. Then The Lakes flexes its muscles at the difficult fourth and fifth holes, which both feature challenging green complexes. The hills and valleys on the long par-3 fourth will ask questions of your scorecard, as will the horseshoe-shaped fifth green.

The back nine, which is the back nine of the composite course, is the better of the two nines and possibly the best of the entire resort. The par-4 11th hole features bunkering resembling that of Royal Melbourne or Kingston Heath, while the two-tiered 14th green also stands out.

The finishing trio of holes on the Lakes course, however, are probably the only three reasons you need to visit The Vines. These holes tempt the golfer to continually take on the hazards, and this entertaining stretch starts with the 174-metre, par-3 16th hole. The championship pin placement is back right, requiring a mid to long iron carry over two bunkers with water looming to the right. Then comes the awfully tempting par-4 17th – this penultimate hole measures 369m and invites the longer hitters to carry the water hazard (260m) to leave a wedge in. The shorter hitters can take the safe route along the fairway but battle with bunkers 230m from the tee.

Typical of resort golf philosophy, the finishing hole is a grandstand par 5 with a massive risk/reward dichotomy. Golfers chasing a bad round will undoubtedly attempt an 11th-hour eagle, and for that reason professional tournaments and social fourballs alike have seen plenty of drama. The 18th is short for a par 5 at 451m, but water guards the left and right-hand side of the hole, as well as front left of the green. Ellenbrook Course: 6,561 metres
You might recognise holes one, two and 12 to 18 of the Ellenbrook course – they make up the composite’s opening nine. This relaxed, resort-style parkland layout features generous driving zones, as well as strategic water hazards and bunkers. Outside of the prized holes you have seen on TV, the eighth is the star of Ellenbrook. This 161m par 3 has a beautifully wide and undulating green guarded by five bunkers.  There is a somewhat obsolete bunker halfway between the tee and green, which appears to punish the heavy tee shot. Always take the centre of the green here, regardless of whether the pin is at the back left or front of this heart-shaped green. The other par 3s that highlight Ellenbrook are the 13th – an incredibly challenging hole that measures 180m off the white and 230m off the black – and the shorter 17th. The former features a series of bunkers right of the green that make getting up and down a challenge, while the latter allows a bailout to the right for those not wanting to carry over the fairway bunker to the kidney-shaped green. When the pin is up the back, this hole requires a long draw to have any chance at a birdie. 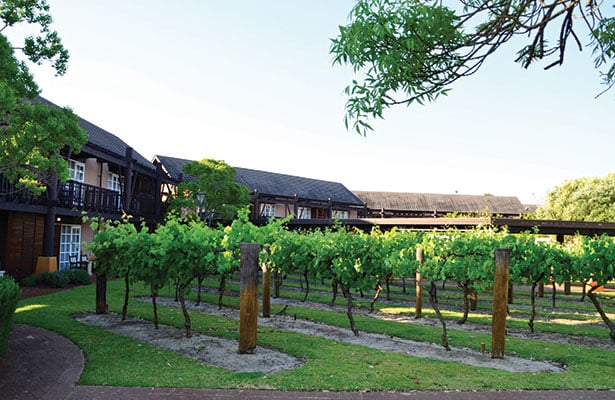 Novotel Vines Resort
The location of The Vines Resort couldn’t be any more ideal in the beautiful Swan Valley wine region. Only a year after The Vines celebrated its 25-year anniversary, a $4 million refurbishment was completed in April, and it’s a win for golf guests. All 91 rooms and 12 suites of the Novotel guest rooms have had a total makeover, so be sure to book at least a night to give yourself a rest between playing both enjoyable layouts.

Explore the Swan Valley
Last year marked 180 years of winemaking for the Swan Valley, which has produced some memorable drops. During the early settlement of Western Australia, the Valley became the birthplace of viticulture and is now renowned for chenin blanc, verdelho, shiraz and petit verdot varieties. The Swan Valley has a unique blend of small, boutique wineries and big international names such as Houghtons and Sandalford.