Mullets, not mallets, are the talk of the golf world right now thanks to Australia’s loveable PGA Tour star Cameron Smith.

Yep, the iconic ‘neck warmer’ that rocked the 1970s, ’80s and ’90s is back turning heads yet again, this time on the fairways. And it must be leaving follicly challenged Major champions like Tiger Woods and Stewart Cink green with envy, if not with a sorry case of, um, melon-choly.

Many will remember Cink removing his cap on TV at the 2014 Sony Open in Hawaii to reveal what can only be described as a choc-vanilla tan line, like Neapolitan ice cream (look away, kids!).

And it was Woods who once joked to ESPN’s Scott Van Pelt: “I’ve got my helipad up top, and I’m very happy with that. It’s time to moonwalk on me.”

Who could have known what bald truths lay buried under that iconic ‘TW’ hat?

The legendary Sam Snead took cloaking to another level with his iconic fedora. His signature look kept most of us in the dark about the chrome dome he was hiding underneath.

It continues to evolve. Cam Smith’s mullet is getting “filthier” as he promised it would. Gearing up for @thegenesisinv at Riviera. #CamSmith #mulletman pic.twitter.com/zcrYfyNgSU

Which is why it’s refreshing to see our man Smithy – Australian golf’s heir apparent – with hair still very much apparent.

“I saw a few of the Aussie rugby league boys doing it and thought it was a great time to do it during quarantine,” Smith, 27, revealed at this year’s Sony Open in Hawaii.

“It was [initially] just something fun to make people laugh, but I’ve kept it going and it has almost turned into my good luck charm. It’s not bad. I’d really like to go full business at the front and party at the back.”

The exciting thing for Smith is, much like his burgeoning PGA Tour career, his hairdo is very much in its infancy. There’s simply no end to the possibilities of how far he can go.

While there’s no exact science behind it, there does appear to be a link between having length behind the ears and contending on a Sunday. And it has more to do with just youth being on your side… we think.

The ‘Muswellbrook mud flap’ has been the 15th club in the bag for many a champion golfer over the years. Corey Pavin rocked the luscious locks during the United States’ famous 1991 Ryder Cup victory at Kiawah Island – dubbed the “War On The Shore”. The clean-cut Europeans were simply no match for Pavin’s perm.

The same could be said for the rest of the field at the 1995 Open Championship, where golf’s ‘Wild Thing’ John Daly gave added meaning to “party at the back” on his way to claiming the Auld Claret Jug.

Heck, even our own Greg Norman went through periods when the length of his great white waves were as impressive as his booming drives and, well, certain other things that can now be seen on his Instagram page.

All of which brings us to the point of this hairy conversation: does increased coverage up top provide more confidence below the scalp? It’s entirely possible.

One fact that can’t be denied is that even helipad-head Tiger was noticeably more lush up near his melon region while winning his 15 Major championships than he is today. Coincidence? We think not.

To help you draw your own conclusions, we’ve trawled back through the great hairstyles in golf with a fine-tooth comb (sorry!). Here, we present you with irrefutable evidence that, if you really want to make it in this game, it pays to miss a few cuts.

We rest our case (and scissors), your honour! While he hasn’t quite mastered the ‘business at the front’ component yet, Fleetwood’s back is party central. They say “curls get the girls” and they surely have Fleetwood a hair’s breadth away from kissing his first Major trophy. Hard to split these two PGA Tour journeymen, who have racked up sizeable bank accounts by playing great golf and, presumably, being allergic to hair salons. The parody Twitter account “Pat Perez’s Hair” says everything you need to know about this mullet icon: “If my hair was a golfer, it would have 12 Majors by now.” 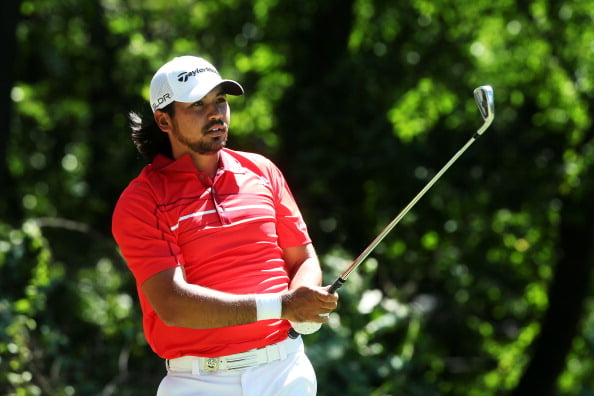 We’re not sure why this look didn’t stick for the former world No.1, but we’re pretty certain Day’s hairdresser chopped away some of his game when they gave him the short back and sides. Unconfirmed reports suggest his back troubles may have actually been triggered by the immense weight of carrying around these magnificent locks, hence the trim. Peak Pavin may have looked like a man who just walked off the set of an adult movie, but there can be no denying his hair-mo combo was all-time and no doubt remains an inspiration for
baby-faced Cameron Smith. The gold standard when it comes to the ‘Kurri Kurri Crash Helmet’ and subject of one of the most iconic images in the sport, the ‘Wild Thing’ kissing the oldest Major trophy in golf as his golden mane takes flight in the St Andrews southerly is the stuff Bohemian dreams are made of. Why else would they call him Long John?