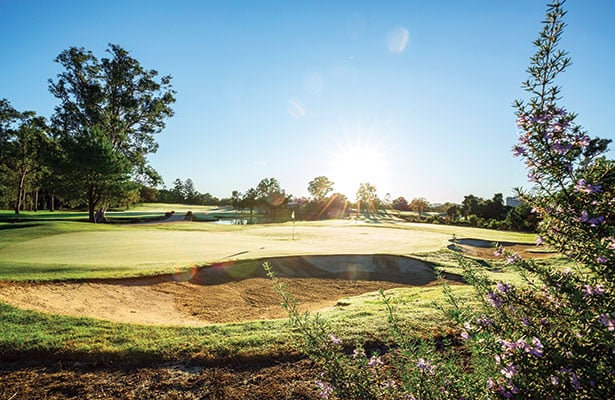 The third-oldest golf club in Queensland is making some dramatic changes to ensure it has a bright and prosperous future.

IT’S A delicate balance that The Brisbane Golf Club is desperate to get right.

To preserve one of the richest histories in Queensland golf while moving with the times sufficiently. To keep existing members, entice new ones and provide a course of a standard that can challenge the very best players in the country.

The latest adjustments to the layout will be given a professional test during the next three years when the club hosts the Isuzu Queensland Open. Most excitement centres  around how the game’s elite players react to putting on the new Champion Ultra Dwarf greens – a first for an Australian golf club.

A popular grass in the warmer southern states of America (including 2014 US Open venue Pinehurst), Brisbane heard of a trial being conducted by the Department of Primary Industries. The club asked to trial some samples, the results of which were so positive it implemented the conversion of under-performing Bermuda 328 greens almost instantly.

The gorgeous finishing hole at Brisbane intimidates golfers with a large bunker right of the green.

The second and eighth holes are the final two of the 21 holes Brisbane boasts that will come into play this month, leaving the club with putting surfaces that will be the envy of any golf course north of Melbourne’s famed Sandbelt region.

“What we can guarantee at Brisbane Golf Club, on our new greens, is a smoother, faster and more consistent ball roll,” said club captain Terry Campbell.

“Golfers able to read the slope of the green and judge the pace of the surface can putt with the confidence that the ball will go exactly where it is aimed.”

With 21 holes on the property, the club has access to five different course configurations, all of which have been slope rated and can be used in club competitions on any given day.

The additional three holes were a Godsend during the greens conversion program. It gave the club flexibility to run six or 12-hole competitions. Another aspect of the club’s future it is acutely aware of is an ageing membership, and significant steps have been taken to create a club juniors not only feel welcome at, but are specifically catered for. When the par-5 first is converted into a par 4, a new chipping and putting facility will be created and the club’s existing driving range will be fitted out with six greens that the club can use as a pitch-and-putt course for junior members only.

Anyone who has played the par-3 course at Barwon Heads on Victorian’s Bellarine Peninsula will know just how fun golf can be with two clubs and a putter. Hence, the committee at Brisbane is eager to open the doors to new players.

A Treasured Past
ESTABLISHED in 1896 at Chelmer, it took less than a decade before the club moved to its current site at Yeerongpilly (adjacent to the Brisbane River), where illustrious course designer Carnegie Clark came up with the routing. But it was a visit 20 years later by an international course architect that was a watershed moment in the club’s history.

During his visit to Australia in 1926, Alister MacKenzie was invited to give his thoughts on how the course could be improved. But with his name not yet forged in golf folklore, Brisbane Golf Club members refused to give the good doctor cart blanche.

“There were a number of objections to some of MacKenzie’s proposal, which retained parts of the existing layout, changed others and excluded two areas, including that occupied by the 15th, 16th and 17th holes,” Bruce Richter wrote in the book commemorating Brisbane Golf Club’s centenary, The Fairway is Mine.

“There were other objections to MacKenzie’s design, which involved six new greens and major changes to the order of play –  in order to introduce two nine-hole loops.”

A sub-committee was formed to consider MacKenzie’s recommendations and after 12 months it was decided that a final decision would be left for the incoming committee to make.

“Today, it is not possible to look at the course and say, ‘That is a MacKenzie hole’,” Richter wrote. “However, MacKenzie’s proposals for additional bunkers were accepted.”

“I certainly haven’t see anything on the ground in my lifetime that indicates MacKenzie’s been here,” says course architect Ross Watson, who has been a consultant to the club since 2007.

In engaging Watson almost a decade ago the club made it clear it wanted to preserve the original layout, so Watson has instituted a classical look in harmony with the course’s topography.

The bunkering at holes such as six, 14, 15 and 17 are reminiscent of MacKenzie’s imprint on the Sandbelt courses some 90 years ago, but Watson said it wasn’t a conscious decision to copy the most distinctive bunkering in the country.

“I’m not trying to copy Royal Melbourne or the Sandbelt, but obviously the bunkering that is down there is beautiful; the sand faces and the visual impact of that is something I’ve always been attracted to anyway,” Watson told Australian Golf Digest.

“When I get an opportunity to do that style and I think it’s right then I go for it.

“Let’s face it, the bunkering is a large part of the game and not only should it be strategic and do all those things, but if you can make it a thing of beauty and something that intimidates to a certain degree through its visual impact, then you should do it.

“If you just put little tiny pot bunkers in here and there with no sand face at all, then I don’t think it would look appropriate at Brisbane.”

Watson’s next assignment is the conversion of the currently ‘illegal’ par-5 first that at 429 metres measures just under the accepted length for a three-shotter, into a 355m par 4 but retaining the existing green complex.

The second will be unveiled soon, with a completely revamped green, but the most exciting addition will be the par-4 eighth, revitalised with a greenside pond and a driving zone that will reward both the bold and the astute.

“It was an ugly duckling before but it had so much potential to be what it now is,” Watson said. “Now we’ve got a beautiful fairway with a fairway bunker you can see, you can think about your strategy off the tee and you’ve got a shot to the green that’s guarded by the water and you’ve got to think about that as well. It’s gone from a nondescript, pretty ugly sort of a hole into something that I think is quite unique.”

Brisbane’s installation of Champion Ultra Dwarf grass on the greens allows for a truer roll. Golfers can use wedges, irons, hybrids or even putters for chip shots.

But the real triumph for Brisbane is its putting surfaces, which received high praise from members of Kingston Heath during a mid-winter visit.

The joy coming from the conversion to the Champion Ultra Dwarf species is that it reinstates the beauty of the rolling golf ball to a part of Australia that has become accustomed to grainy, Bermuda grass that leaves little to the imagination.

You can – as I did – play shots around the green with wedges, 9-irons, hybrids and your putter. There are a number of greens now (due to the quality of the surface) that you would love to spend half an hour trying to make the impossible putt from all corners of the putting surface.

When some of the best professional talent converges on Brisbane Golf Club next year it will mark 25 years since Brisbane hosted its 18th Queensland Open. It was then that a young Victorian amateur by the name of Stuart Appleby emerged victorious.

Perhaps, in 25 years from now, a young golfer whose love of the game was spawned at Brisbane’s pitch-and-putt course will etch their name onto a trophy that already houses the likes of Norman von Nida, Bruce Devlin, Kel Nagle, David Graham and Greg Norman.