These days you are a member at Indooroopilly Golf Club in Brisbane. When did golf first enter the sporting realm of Allan Border?

I didn’t really start playing until I was 17 or 18. The main reason for that was because I was left-handed and everyone in my family – including my father, who was a golfer – was right-handed. I cannot do anything right-handed so I just never played golf.

Finally I joined my father at Northbridge Golf Club in Sydney and we started to play. I was typical of most cricketers – I had this massive slice. But I enjoyed playing with Dad and it went from there. As a keen golfer, Border has rubbed shoulders with plenty of leading tour pros.

How common was it for cricketers back then to also play golf?

Back in those days when I was playing cricket and coming through the ranks, whenever we had any time off we’d go and play golf. Most of the guys back then played so I’ve been around the game since 17, 18 years of age.

We’ve seen photos of Ashes tours and you guys playing golf on your days off. Where did you get to play while on tour?

I’ve been fortunate to play some fantastic courses through cricket, particularly on Ashes tours throughout England. Sunningdale, Wentworth, all the great courses and even up to St Andrews. Any time we were up in Scotland we’d always try to get on there. Who was in charge of organising the golf when you were on tour?

Bob Simpson. He was our coach and he’s a real keen golfer. I think he got down to scratch at one point in his life, but back in my time when I was playing he was probably off a handicap of about 8. Most of the guys played between a handicap of 9 and 18. There were some pretty handy golfers among the group. They didn’t play much but hit the ball pretty well.

Steve Waugh didn’t play much but he was a good striker of the ball. You could tell when he was out on the course that he had a natural swing.

I think now they’re probably a bit more time-poor than we were back in those days, but we’d gear everything around making time for a game of golf. Train in the morning, golf in the afternoon. When you’ve got a coach who’s a very keen golfer, you can get away with all that.

‘We’d gear everything around making time for a game of golf. Train in the morning, golf in the afternoon.’ – Allan Border

Who struggled? Who’d come out for a hit but were hopeless?

Merv was good fun but hacked it around.

Because he was so bad it’s hard to get a good golf story out of Merv. He’s just fun to have on the course because he’s loud and obnoxious but just hacks it around. But he doesn’t care. He’s good fun to play with but at the same time you’re trying to concentrate on playing half decent, so it’s hard work. 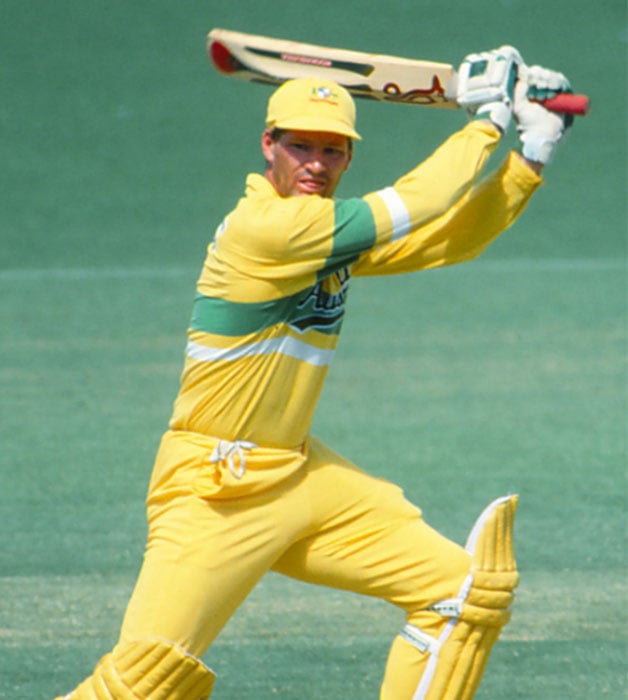 You caddied for Dean Jones [left] for a period when he was playing on the senior circuit. Did he enjoy being boss?

He rates himself very highly so when we were on the golf course he would say things like, “I’m the boss now. You’re just carrying the bag.”

When he did ask questions about what he should hit or how much a putt might break, I’d say, “You’re the boss, you work it out. I’m just carrying the bag.”

He was a player before his time in many respects, with the flamboyant way in which he played. Was he a hard guy to control in a team environment?

No, not at all. He was a really good team man. I wouldn’t say he revolutionised one-day cricket, but in an Australian sense he brought a greater focus on running between the wickets and the way he approached his batting. He was a modern player when we were just starting to make our way in the one-day arena.

Up until Deano came along you didn’t really have tactics particularly, we just played. But with Deano we started to set particular tactics for different bowlers at different stages of the game. He was very good in those initial stages of taking the one-day game more seriously.

We’re in a World Cup and Ashes year this year; can you separate the 1987 World Cup win and the 1989 Ashes victory as to which had more of an impact on the game in Australia?

The ’87 World Cup was 50-over cricket but the group of guys that were there started to transfer their good form into Test cricket as well. By the time we got to the ’89 Ashes we’d started to get a good group together. I would say that ’87 started it but ’89 was the moment. We went from strength to strength after that.

The Australian team will look very different from the World Cup to the Ashes. Do you like having separate squads for the different formats?

The game has become more split in that way, more specialised. We’ve got Twenty20, 50 overs, Tests. You’ll have guys that cross over but not as many as going back in time. We didn’t have Twenty20 to worry about. Normally, the Test team was made up of your best players and they would transfer to one-day cricket anyway but now we’re getting more and more specialised guys. In different eras you’ll have four or five guys that will transfer, but there’s no question it is getting much harder to play all three formats.

What’s the highest-profile pro-am you’ve ever played in? Ever teed it up in a Dunhill Links or anything like that?

I’ve never played a Dunhill Links. The highest standard I’ve probably ever played was the New Zealand Open at The Hills in Queenstown. You also got to play at Jack’s Point as a ‘lucky loser’, which I tend to play in.

I played a few Australian Open pro-ams and things like that but not for a number of years now. I’m waiting for the invites! Golf, just as much as cricket, has allowed Border to play all over the world.

What’s the most nervous you’ve ever been on a golf course?

The first tee at St Andrews, the first time that I played there. It’s got an atmosphere that’s a bit daunting. It was either the 1981 or the 1985 Ashes tour. That first tee shot when you get announced… And because it’s St Andrews, you’ve got acres and acres of space to hit into but you’re still worried about donging it on the head with everyone standing around watching. That was pretty nerve-wracking.

The New Zealand Open was also quite intimidating. You’re playing with a half-decent pro and the first tee at The Hills there can be quite a crowd and they can get quite tight, especially on the left.

As a left-hander all you can think about is trying not to shank one and donging someone on the head. If you were just playing a normal game that wouldn’t even enter your head, but because there’s people around it adds a different level of pressure.

Obviously in my cricket days I played in front of plenty of people, but when you’re batting the crowd is a hundred metres away. I’m not going to be hitting any spectators unless I’m batting well and hitting sixes. But golf, when there’s spectators around they are so close to you and you’re out of your comfort zone because it’s a game you play for fun. I’m not a scratch marker or anything.

‘When you’re batting in cricket the crowd is a hundred metres away. But in golf, spectators are so close to you and you’re out of your comfort zone.’ – Allan Border

That’s a tough question. I’d have to say Cypress Point and all those courses along that stretch of coastline… Pebble Beach. They’re pretty hard to beat from an aesthetics point of view.

When I ask you about the best round you’ve ever played, what comes to mind?

The best round I’ve had was four-over at Royal Melbourne, on the West course. I was three-under after 12 holes and lost it coming in.